Administrator of the Year 2007 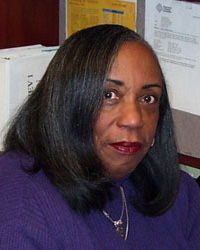 Administrator of the Year 2007

Tonya Turner began working with RHF at the national headquarters office in Long Beach as an Occupancy Specialist, on a temporary basis, in 2003.

In 2004, she was promoted to Administrator of Pilgrim Tower North and Pilgrim Tower East, Pasadena, which consists of 416 apartments for older adults.

She manages an on-site staff of 18 people.

Tonya’s regional manager, Chapin Hemphill, writes that during this same time period she completed a tax credit and bond conversion of the financing program for PTN. During this process, four re-certifications were required of the residents. Her ability to communicate with the wide array of nationalities, personalities, and races that make up the tenancy allows for a unique harmony.

Tonya writes, “The housing field takes a lot of effort. If one does not feel he or she is improving the quality of life for others, and enjoys doing it, that person is in the wrong field. Being a housing administrator takes a lot of patience, commitment, concern, continued education, and respect for the people one is serving.”

She is also very active with Pasadena community events and the local Councilperson’s office.

We are pleased to recognize Tonya Turner as 2007 Administrator of the Year.