Community Board Member of the Year 2009 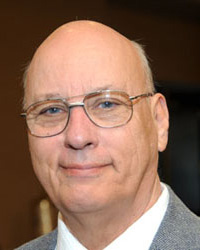 2009 Community Board Member of the Year

The Reverend, Glenn Hunt, grew up in Chicago, IL. He graduated from Elmhurst College in 1966 and from Eden Theological Seminary in 1970, and he was then was called to become Pastor of Eden United Church of Christ in Cedar Rapids, IA. He received the Doctor of Ministry degree from Eden in 1979. From 1975 to 1978 he also served Central City UCC as part of a larger parish arrangement with Hope UCC in Hiawatha.

In 1988 he was contacted by representatives of Retirement Housing Foundation to explore a potential affordable housing community. Rev. Hunt and several others from Eden UCC, Hope UCC, and First Congregational UCC were instrumental in every aspect of forming what we now know as Westover Manor, a 40-unit affordable apartment community serving older adults and persons with disabilities.

In December 2008 he completed his pastorate at Eden Church after over 38 years and also resigned as president of Westover Manor’s board after nearly 20 years of service.

Manager of Westover Manor, Amber Clefisch, writes that “Rev. Hunt has gone above and beyond the call of duty as board president. He has been there every time Westover Manor needed assistance with in-kind gifts; such as a TV, piano, yarn for our project HANDS group, monetary donations to assist in holding parties for the residents, and new patio furniture. He has encouraged his congregation’s involvement with Westover Manor and the various parties and social events.”

Glenn has also served on the Board of Trustees of the Mayflower Home in Grinnell, a continuing care facility of the UCC, for six years, as well as their Foundation Board for six years, serving as chair of each board for three years. He has served on the Board of Directors for the Iowa UCC Conference, including two years as chair. Along with the principal of a local elementary school, he assisted in starting the Taylor Area Neighborhood Association. He has volunteered as an on-call chaplain at St. Luke’s Hospital for 11 years, he was on the start-up board for the local Habitat for Humanity, and he was a member of Churches United. Additionally, he participated in a local Jail Chaplaincy program for a term of three years, two of the years as chair. He also regularly attends RHF’s north central regional management training conferences.

RHF is pleased to recognize Rev. Glenn Hunt as 2009 Local Community Board Member of the Year.