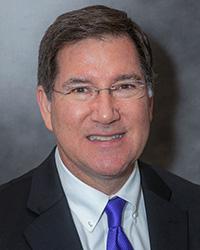 Brian Magnone joined RHF in January 2004 as Director of Treasury and was promoted to Vice President/Treasury effective June 2008. In 2018, he was promoted to CIO (Chief Investment Officer).

He was previously Director of Operations of ChinaSource, a think tank focused on China. Prior to ChinaSource, Mr. Magnone was Director of Treasury of CBN in Virginia for 10 years where he directed several finance and accounting functions including global cash management, bank relations, investment portfolios, budgets, and financial planning.

He also was Controller with a CBN start-up company in Silicon Valley and worked with leading venture capital firm Sequoia Capital whose list of start-ups include Apple Computer, Cisco Systems, Electronic Arts, Symantec, and Yahoo! He began his career as a bank examiner for the Comptroller of Currency, a division of the U.S. Treasury.

Mr. Magnone holds a B.S. degree in Business Administration from West Liberty University and an M.B.A. from Regent University. He has earned Chartered Financial Analyst (CFA) and Certified Cash Manager (CCM) designations. He is also a California real estate broker.