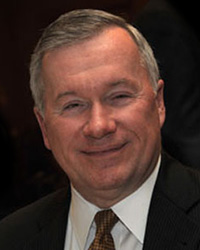 Tom Gleason is a housing finance professional with more than 32 years of experience in affordable housing lending, community development, and bond finance.

Tom was appointed Executive Director of the Massachusetts Housing Finance Agency (MassHousing) in October 2001. With offices in Boston, MassHousing is a quasi-public state authority created by the Massachusetts legislature in 1966. To date, the agency has provided more than $5.6 billion in financing for rental housing and more than $4.8 billion for homeownership.

Tom has held several key leadership positions during his 22-year tenure at MassHousing. Prior to becoming the Executive Director, he served for six years as MassHousing’s Deputy Director. Tom also served as the director of MassHousing’s Home Ownership business line, where he streamlined mortgage production programs and created its asset management department. Before joining MassHousing, Tom spent 10 years with the Massachusetts Executive Office of Communities and Development, where he administered the state’s Small Cities Program as well as various other housing and community development programs.

Under Tom’s leadership, MassHousing has re-established itself as the leading provider of affordable housing resources in Massachusetts. In 2004, as a result of the agency’s improved financial condition, MassHousing created the Priority Development Fund, a $100 million gap financing program to stimulate the production of new rental housing. The program was funded totally by internal cost-saving measures and intelligent management of the agency’s resources. That same year MassHousing also completed the Demonstration Disposition Program, a massive, ten-year, $500 million rehabilitation of ten HUD-foreclosed, distressed inner-city rental housing developments. They managed the projects on behalf of HUD.

During Tom’s tenure as chief executive, MassHousing has nearly doubled the number of rental housing units it oversees. MassHousing has also been extremely helpful to RHF’s efforts in acquiring ten affordable housing communities in Massachusetts with a total of 1,582 apartments.

Tom serves on the Board of Directors for several organizations including the National Council of State Housing Agencies, the Massachusetts Housing Investment Corporation, and the Community Economic Development Assistance Corporation. He is an emeritus member of the Massachusetts Association for the Blind.

Tom is a graduate of Holy Cross College in Worcester, Massachusetts. He resides in Westwood, Massachusetts with his wife and twin sons.

RHF is pleased to present the 2010 Friend of the Elderly Award to Thomas R. Gleason, Executive Director of MassHousing.