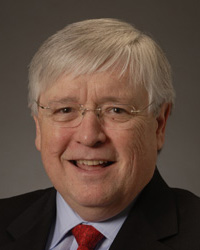 Since 2001, Larry Minnix has served as President and CEO of LeadingAge, formerly the American Association of Homes and Services for the Aging (AAHSA). LeadingAge is the national advocate for 5,600 non-profit providers and the millions of persons these members have served over the past 50 years. 2011 also marks the 50th Anniversary of LeadingAge.

For more than 35 years, Larry has been a passionate advocate for leadership and innovation in not-for-profit aging services. He entered the field as an administrative intern at Wesley Woods Center of Emory University, where he went on to serve as CEO. He also served as a LeadingAge board member prior to joining the association as its CEO.

Larry has translated his passion into practice as LeadingAge’s CEO. During his tenure, he established the LeadingAge Center for Aging Services Technologies (CAST), and developed programs to address important issues like workforce retention and regulatory reform.

Larry is a frequent speaker on long-term care, quality, ethics, and public policy. He chairs the board of Generations United. He was named in the Non-Profit Times’ 2008, 2009, and 2010 “Power and Influence Top 50” lists.

Larry received his Bachelor of Science degree in 1969 from Emory University with a major in psychology. Following that, he entered Candler School of Theology, and he graduated with a Master of Divinity in 1972, and later received a Doctor of Ministry in 1977.

He has held the following offices in the field of aging:

RHF is pleased to present the 2011 Friend of the Elderly Award to William L. (Larry) Minnix, Jr.