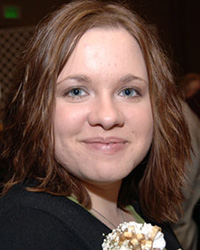 Julie Lemke joined the RHF team four years ago as Marketing Director for Monona Meadows in Monona, WI. This position was created due to the 20 vacancies that existed in a 70-unit community. Within 12 months, Julie took Monona Meadows to 100 percent occupancy, and she created such an interest that the waiting list began to grow.

As a result of her performance, Julie was promoted to Manager when the position became vacant. Over the past 12 months, Julie has improved the community and resident satisfaction by having the entire building re-painted and spearheading “Project Home” which replaced several items in the building with Energy Star equipment, ultimately saving Monona Meadows thousands of dollars.

Julie has taken her expertise on the road to other RHF communities in the North Central Region and the Southwest Region.

The Executive Committee of the Monona Meadows Residents Association writes, “Julie is a great asset to our community, and we appreciate her work with us and for us here at Monona Meadows. She is friendly and cooperative, always answering questions and finding solutions to whatever concerns residents have on their minds. Her knowledge and understanding of all the HUD rules and regulations is apparent. She goes out of her way to show concern for the residents and the property alike. We want to thank her for her management expertise and her fairness in dealing with problems. We are glad she is here with us.”

Julie is a fine example of believing that problems can be overcome and she addresses them with a positive attitude. She helps other managers believe in themselves and encourages them to do what needs to be done.

In her performance appraisal in September 2006, her comments included a smiley face and a note in big print that read, “I LOVE MY JOB!  THANK YOU FOR ALL OF THE OPPORTUNITIES.”

Retirement Housing Foundation is pleased to recognize Julie Lemke as 2007 Manager of the Year.