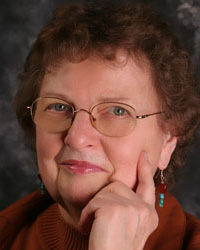 Linda has worked at 300 Main since April 1994, when she and her husband became co-managers. After Arthur’s unfortunate death a few years later, Linda decided to make 300 Main her permanent home.

Regional Manager Bruce Burke writes, “Her many ties with residents, and her community involvement, have made Linda a well-known personality and a force in the small community of Estacada.”

All HUD facilities need to have real estate assessment (REAC) inspections and management and occupancy reviews (MOR). In a 2001 MOR conducted by Oregon Housing and Community Services, the inspector wrote, “Linda Forsberg is to be congratulated for her exceptional job as the manager of 300 Main.  It is her pride in a job well done that is apparent in every aspect of the property and its efficient performance. Her professional attitude and love of her job are foremost in the performance of her duties, and she is a tremendous asset to her company and her community.” Furthermore, Mr. Burke comments that her reports and accounting have been presented on time and in an accurate fashion. The most recent REAC inspection received a score of 98a out of 100.

What really sets her apart is her compassion for her residents. She considers the residents a large extended family and offers to them all of the commitment that the term “family” implies. When residents are ill, she checks in on them regularly to ensure their comfort and well-being.

Linda has applied her musical talents to organizing a singing group, “The Mainliners” which rehearses at 300 Main and regularly performs sing-alongs for the 300 Main residents, those at the Estacada Senior Center, as well as other venues.

Gardening is another one of her passions. Fifteen years ago, 300 Main had a small strip of grass along the frontage and a steep hill overgrown with blackberry bushes. Over the years, Linda and her gardening friends have transformed the grounds into a lush flower and vegetable garden. She is aware of the “Eden Alternative” model and has made it her own.

Linda is very much involved in community activities. She was instrumental in convincing the Mayor and City Council to install safety lights at the high traffic crossing in front of 300 Main. She also participates with the Oregon Council for the Arts, and several of her residents have had their prize-winning poetry published in an annual anthology produced by the organization.

Local Board President Ruth Cousins also affirms Linda’s skills as a manager, as does board member Dr. Don Rose, who writes, “I cannot imagine a more caring, responsible person being given charge over any such facilities and don’t you think about moving her!”

Fourteen residents also seconded the nomination and spoke about all of the aforementioned things as well as Linda’s involvement in collecting clothing for the needy, toys for underprivileged children, newspapers for church paper drives, and used items for the Yellow House, which distributes to needy people. “She is never too busy to do that little extra that makes us all happy to call 300 Main our home.”

RHF is pleased to recognize Linda Forsberg as 2008 Manager of the Year.