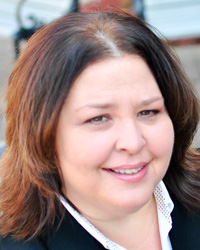 In 2003 the Deaconess Hospital in Evansville, Indiana, transferred Independence Square, a 123-apartment HUD 202 community, to Retirement Housing Foundation. We are grateful that they elected to give this community to RHF, at the suggestion of Jean Dremstedt, so that it would remain in the United Church of Christ family. In September 2005, Pam Jennings came to Independence Square as our manager.

Regional Manager Lavonne Mickelson writes that Pam experienced many obstacles upon beginning her employment with us because of the issues left by the previous managing agent. Independence Square had very little income or available funds, 11 vacant units, and disgruntled staff and residents. Pam worked diligently to remedy the many issues and succeeded in bringing the property to 100% occupancy in just a few months. In fact, she had residents who moved to Independence Square just because they heard that she was there. Her efforts have been recognized by HUD with the receipt of her second Superior Management Occupancy Review rating in consecutive years.

This past summer, we received the resident survey results for Independence Square showing a 93% satisfaction rating. Also included were comments from residents including:

Pam is one of the leading managers in the Midwest region, and she is very willing and eager to help train new managers and offer assistance to others when needed. She regularly plans dinners and other functions, and she most recently organized an ice cream social and gospel concert. She’s always looking for ways to bring her residents together. Pam and her assistant, Susan, began hosting breakfast at the property on Saturday once a month. This has been very welcomed by the residents, and they say that Pam makes the best pancakes they’ve ever had!

Pam is also active outside of RHF. She organizes a team and participates annually in the American Diabetes Association Step Out Walk, volunteers her time as cheer coach for her daughter’s cheer team, and volunteers at the Catholic School where her daughter attends.

RHF is pleased to recognize Pam Jennings as 2011 Manager of the Year.