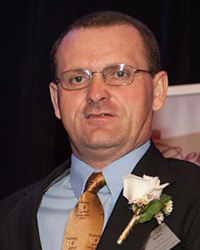 Rich is very conscientious of his job and the residents.

“Rich goes above and beyond at his job,” said Crystal Davis, a resident. “He is a great manager and I appreciate everything that he does for us.”

Rich is looked up to by the other managers in the North Central region and they often consult with him on maintenance questions and office procedure. He has also helped train new managers in this region.

One of the things Rich has done over the years is learning how to do work that other properties have vendors come in and do. He has replaced the roofing on four of his cottage-like buildings, the siding on two garages, and remodeled an entire shower area after researching and learning what needed to be done in order to save his community the added cost of a vendor doing the work.

Rich is always looking for ways to save money, and he was the first manager to introduce LED lighting into his community in this region.

RHF is pleased to present Richard Bates with the 2016 Manager of the Year Award.