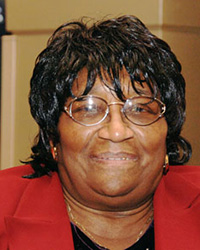 Catherine Floyd was born in Saluda, South Carolina in 1934, as the 7th of 12 children. At the age of three, her mother took her from church to church to preach the gospel. Catherine attended beautician school, she drove a cab from 1960 to 1968, and she worked for many years in a dry cleaning establishment. Catherine has been active in the church community all of her life, and she is currently a member of St. Joseph Baptist Church in Washington, DC.

Catherine married her husband, Paul Veney, in 1954. Together they have a son and daughter, five grandchildren, and ten great-grandchildren. She cared for her husband during his illness until he passed away in 1999. Catherine is known for being a good samaritan, caring for members of her family, cooking, and cleaning for them when they need help. When Ms. Veney made Washington, DC her home she preached on radio and TV stations with the late Pete Green, and they called her “Brown Sugar.” She also continued to serve the poor and the needy, giving out food through many churches and helping the homeless with clothing and food. She performed voluntary missionary work at the DC Supreme Court helping people in prison programs to keep them off drugs and get them jobs.

A member of the Resident Council says, “She has gospel programs, which consist of singing groups, dinners for the various holidays, and parties in order to get the residents who don’t have places to go out of their apartments. She visits residents and does things for them they cannot do for themselves. When it’s time for one of her planned functions, she will start cooking two or three days ahead of time preparing a large feast. When there is food left over, she will insist that they take a plate to their apartments. She will spend her last dime to purchase food and medicine for residents or friends. She will take them places when they don’t have a ride to get there. She will pray with them and for them. She is never too busy to help anyone whenever they call her. She is the chairperson of the Sick Committee at North Capitol at Plymouth. She is one of a kind because when God made her, He broke the mold.”

Retirement Housing Foundation is pleased to recognize Catherine Veney as our 2007 Resident of the Year.