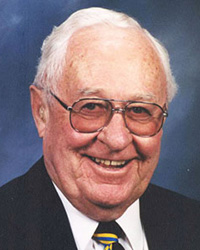 Charlie Gregoire has been a resident of Gold Country Retirement Center since April 1, 2000. Apartment housing manager, Patricia Raines, writes, “When Charlie moved in, his wife Peggy had the beginning stages of Alzheimer’s Disease. His daughters told me not to worry, Charlie would tell me how to run the place once he moved in. This, of course, was a joke, but Charlie has a lot of knowledge in the area of building maintenance and landscaping, which he has shared with us over the years. He and a fellow resident got their wood-cutting tools out and made planter boxes and plant stands for our outdoor patio. They made a greenhouse cart where they started tomato seedlings to give to all the residents who wanted them, and they also started flower seedlings.”

Charlie has served on the Resident Council, the Christian Fellowship Committee, and has been a volunteer Bingo caller. He is a good friend to his neighbors, always willing to give a helping hand or drive someone to an appointment. When his wife eventually had to move to the skilled nursing unit, Charlie started helping out in that part of the community too.

A former resident of the year, Tom Mills, wrote, “Charlie has volunteered for years for such community services as Meals on Wheels, Federated Church of Placerville, Pioneer Fire Protection District, and the Senior Club.” Tom says that “Charlie’s wife’s long illness and passing took a lot of wind out of his sails, but he keeps going with his help to others and his laughter and friendship to all, staff and residents alike. He is an excellent advocate for life at Gold Country.”

RHF is pleased to recognize Charlie Gregoire as our 2009 Resident of the Year.