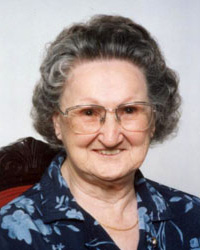 Elsie Dixon was the first resident to move in to Ingleside Manor when it opened in August 2006. Elsie grew up in North Dakota during the Depression in a family of ten children and nine step-children. In the brutal North Dakota winters, she nestled under feather quilts her mother stitched together made from the down of geese and ducks the family raised.

It is said that Elsie could earn hundreds of dollars for each quilt, but instead she sews for friends, family, and those in need. She spends 45 to 50 hours a week at her sewing machine.

She receives many thank you notes, including this one from the NATO Training Mission in Kabul, Afghanistan. “On behalf of the soldiers of NTMA/CSTC-A, I would like to express my appreciation for your thoughtfulness and generosity. The quilt I received was a pleasant surprise and is desired by everyone in my office. I felt lucky to have received such a wonderfully crafted gift. I was looking for a blanket to use as the colder weather has begun to arrive here in Kabul, Afghanistan, but I think I will use the quilt as office décor instead. It is much too nice to use as a blanket. I assure that your time and effort is appreciated. I can’t thank you enough for your support and I wish you the best.”