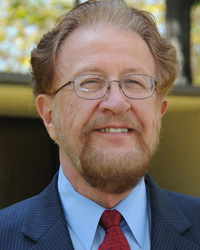 “I believe that the most important thing I have done during the time I have been on the Board of RHF was the recruiting and employment of the Rev. Dr. Laverne Joseph for the position of President and CEO.” (Rex Chapman – 1997)

Dr. Laverne Joseph was named the recipient of the 2011 Rex Chapman Award by Retirement Housing Foundation’s (RHF) National Board of Directors at RHF’s 50th Anniversary Dinner.

The award acknowledges Dr. Joseph’s 25 years of service on the National Board and as President & CEO of RHF. During his tenure, RHF has tripled in size to 163 communities in 25 states, the District of Columbia, Puerto Rico, and the U.S. Virgin Islands.

Dr. Joseph is a recognized leader in the affordable housing field whose expertise is called upon at the state and national level. His testimony in Congress has had an impact on policy affecting affordable housing issues nationally. He serves and has served, in various capacities with organizations such as LeadingAge (formerly known as the American Association of Homes and Services for the Aging), Aging Services of California, and the Council for Health and Human Service Ministries (CHHSM) of the United Church of Christ.

This award is named in honor of Rex Chapman who was active for 30 years with RHF, both in Cathedral Pioneer Church Homes in Sacramento and, later, serving on the National Board of RHF. While on the Board, he worked tirelessly on behalf of seniors, low-income families, and persons with disabilities from 1977 to 1998 (holding the position of Board Chair from 1984 to 1989). In 1999, he received the honor of Director Emeritus.

The RHF Board created the Rex Chapman Award after Rex’s death in 2002. While not given annually, this prestigious award is given to an individual or organization that has consistently shown a commitment to championing the cause of affordable housing.

RHF’s National Board of Directors are pleased to present the Rex Chapman Award to Dr. Laverne R. Joseph for his decades of service to the field of aging services.