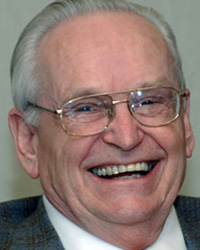 This award is named in honor of Rex Chapman who was active for 30 years with RHF, both in Cathedral Pioneer Church Homes in Sacramento and in serving and chairing, the National Board of RHF.

While on the Board, he worked tirelessly on behalf of seniors, low-income families, and persons with disabilities from 1977 to 1998.

While not given annually, this prestigious award is given to an individual who has consistently shown a commitment to championing the cause of affordable housing and services.

Don King’s adventurous life and serving heart are an inspiration to everyone at RHF. Don’s service began in the U.S. Naval Reserve during the 1950s. His patriotic service took him throughout Japan and Korea.

After years of serving his country, he returned to the states and started serving his local church congregation, the Pioneer Congregational United Church of Christ. During his time at church, Don King has served as a moderator, and he has been on almost every board and committee. Don is an excellent communicator, a genuine peacemaker, and a good steward of his God-given talents and abilities.

Don’s involvement in the Board of Cathedral Pioneer Church Homes and Retirement Housing Foundation dates back to 1987. During his service, Don has served in many capacities including RHF Vice Chair from 1994-2005 and Board Chair from 2005-2011.

His passion for seniors is evident not only by his involvement in various affordable housing boards but also by his persistence in political advocacy. Don has attended countless meetings and conferences of LeadingAge (formerly known as the American Association of Homes and Services for the Aging) as well as LeadingAge California. Don has persistently advocated on various issues affecting seniors with legislators at both national and state levels.

Don has also had a successful career in reporting, and he founded the Sacramento Deposition Reporters and the Don King Reporters. Don is a model husband and father, sharing his life with his wife Mary and their children. Mary King has served on the RHF Advisory Commission since its beginning in 1994. We are sorry that Don is retiring from the RHF Board, but we are pleased that he will continue to serve on the Board of Cathedral Pioneer Church Homes.

For his faithful and persistent service in the senior housing community, RHF is pleased to present Don King with the prestigious Rex Chapman Award.