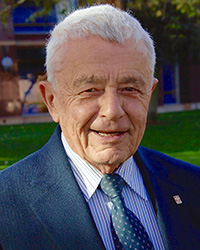 The RHF Board established the Rex Chapman Award in honor of Rex, who served on the Board of Retirement Housing Foundation from 1977 to 1998 and chaired the Board from 1984 to 1989.

The award is not given every year, but when it is given it is to someone who has provided outstanding leadership to the mission of RHF, who oversaw the growth of RHF, and who has had a lifetime and/or singular effect on the success of the mission.

In our 56th year, we are honored to present the Rex Chapman Award to the Rev. Dr. John E. Trnka. John has served the RHF mission for 33 years.

One of our three founders and second executive director, Rev. Clark Harshfield, asked John to join the Advisory Boards of Westminster Village Kentuckiana and Yellowwood Terrace, both in Clarksville, Indiana, in 1983. (Indiana was the first state outside of California to welcome the RHF mission in 1981.)

John was born in Chicago, and received his college education at Elmhurst College, Elmhurst, Illinois, followed by four years at Eden Seminary in Webster Groves, Missouri.

He has been happily married to Shirley Elmore of Collinsville for 60 years.

Shirley served on the Advisory Commission since its founding in 1984. She served as Chair from October 2007 to February 2011 and continued on the Commission until her retirement in September 2016.

The Trnkas have two children, Deborah Ann Cochran, a nurse practitioner, and John Jr., a Colonel in the United States Air Force for more than 31 years.

For his distinguished leadership and 33 years of outstanding service to the RHF mission, we are pleased to present the Rex Chapman Award to the Rev. Dr. John E. Trnka.