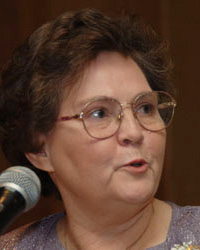 After Winona retired as postmaster from the U.S. Postal Service three years ago, she continued with monthly devotionals, lunches, and games for the residents. Sonny conducts the Bible classes, but Viola says that Winona single-handedly cooks and serves the meals for all the residents. During the two months that she was ill, and not able to cook, she made sure her husband brought the monthly meal for the residents. Winona also sends a birthday card to every resident at Miracle Manor.

Manager Viola Mendiola writes, “Winona is one of the kindest, most generous people I’ve ever known. She has not allowed her sickness to deter her from serving our residents. They look forward to their monthly bingo/Bible study/luncheon. The fellowship is awesome.”

RHF is pleased to recognize Winona Balch as 2007 Volunteer of the Year.